We are working on building a website where you can learn more about us and our team as you follow our adventures. Check it out at www.luckyfoxkennel.com.
Posted by Lucky Fox Kennel at 2:56 PM No comments:

We love Rig Rondy. We look forward to it year round and we are already looking forward to 2016. This year was good for us, as we learned a good amount about what we need to work on with our team, and individually with each dog.

The dogs did well during the rig race and we were pleased with the way they ran. However, Denali was a bit of a "distracted husky" during canicross. During the summer, we took a lot of time off, partially due to the weather, and partially due to the fact we wanted to sleep. What we learned from this is that even if it is too warm to run, we can still work with the dogs in other ways. Obedience, hook up, etc. Not that sleeping in is bad (obviously we love it), but we want to ensure we give our dogs the best chance to perform well, and to do that, we need to put the work in.

That being said, Denali did significantly better during the canicross portion of the relay race and our relay team placed third.
The relay was a fun event. It consists of canicross, bikejor, and rig. Our dryland musher needed two more dogs to make a full team. So, Ruger and Prudhoe joined her. This was great for them as they were able to learn to work with another dog and listen to another musher other than Nick or Joy. They did well, and she enjoyed racing with them.

Overall, we were pleased with the dogs' performance and were grateful for any lessons we learned. We were most pleased with Calypso. Sometimes, she gets shy and antsy in crowds. She tends to cower, and not want to participate. We were worried that all the excitement might be an issue for her. It was a starting line decision whether to race her or not. However, she wanted to race and she truly excelled. She ran phenomenally and we were impressed with the effort she put in. She did well at the starting line, and did not seem too bothered by all the other dogs at the race.
This was exciting for us to see, as we have been working very hard with her. It was nice to know the work we have been doing is working with her.

Rig Rondy is well organized and is a great race for beginners. Everyone is willing to help, and we have learned quite a bit by watching other teams and asking questions. We are grateful to everyone who has helped us learn and grow in the sport, 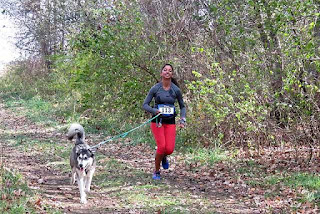 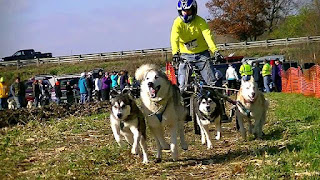 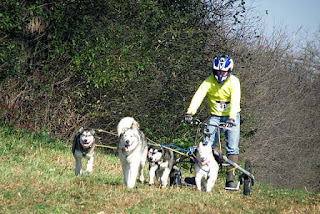 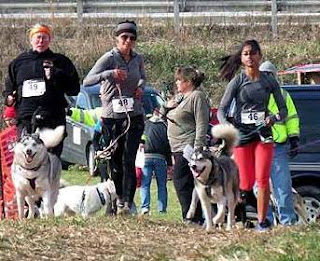 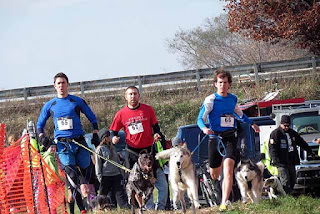 Posted by Lucky Fox Kennel at 6:21 PM No comments: