Dryland Mushing on the Frisco Trail

On Saturday, we took the Dogs to the Frisco Trail (Walnut Grove Trailhead) for a little Dryland Mushing. Joy ran along beside the rig while Nick mushed the dogs. This was Prudhoe's first time on the rig and he did great, completing close to 4.5 miles. Denali and Ruger ran lead with Calypso and Prudhoe in wheel. It was a little humid, but the dogs did great. We are very fortunate to have some great trails in the area for training.
Posted by Lucky Fox Kennel at 11:23 AM No comments:

Prudhoe has been with us for a few days now and is adjusting well. He still has a few puppy-like tendencies such as jumping and mouthing. He does not like to have his paws touched either. But, he is getting better. He gets very excited when you open the door to the house and he is quite a velcro dog, which is pretty sweet, especially when he gives you those puppy eyes.

He is getting along well with the other dogs. He and Ruger (and sometimes Denali) have been having a fun time playing together. Calypso does get irritated with his puppy antics at times, but he really likes her. He follows her around the yard and the house and she doesn't seem to mind. She seems to mother him a bit. Calypso and Denali have been spending a bit more time together as well which is nice to see. Fox - well, Fox is Fox and he just doesn't care.

Prudhoe has been on two runs with us. His first run was just under 1 mile and his second was a very easy 2.3 miles. He did quite well both times. He is a hard worker and he has a strong desire to please. He is learning his commands (gee, haw, on-by, hike, whoa) and he wants to run. Yesterday, Prudhoe was taking the day off, and as Joy was harnessing Ruger and Denali for an evening run, Prudhoe jumped at the harness and tried to put his head through it. He was disappointed when Joy put him back in the yard and he did not get to run. This is a wonderful sign. As he is just beginning, he will run a day or two and then have a day or two off until he begins to lose a bit of weight and get more comfortable with our pack.

We are very excited to have Prudhoe in our family! He is fitting in well.
Posted by Lucky Fox Kennel at 8:50 AM No comments:

Welcome to the family, Prudhoe!

Well, we did it. We officially added a fifth dog to our family. Yes, you read correctly - five. This gives us a full, four-dog team for rig and sled races.

Prudhoe (formally, Apollo) is an Alaskan Malamute. He is approximately two years old. He is currently about the height of Denali and the weight of Ruger. We found him via PetFinder and he was with Pet Angels Rescue out of Edmond, OK (near Oklahoma City).

Here is his story straight from the Pet Angels adoption page:

"Hi! I'm Apollo. I was rescued from the Oklahoma City Pound at the end of September, my previous people got me from the Tulsa pound (Stray), just a few months beforehand but they said the other dog in the household didn't like me and well I was put in doggy jail again and almost lost my life, I mean it was really close they called Pet Angels and Pet Angels said they would pull me but someone forgot to note it in the computer and well I made it on that cold stainless steel table to be put down but Thankfully the Animal Welfare worker looked closer into the notes and seen that there had been the call made and called to double check just moments before the needle was to go into my arm! I am so Thankful for that animal Control Office Because Pet Angels had arrange to pick me up that following day and well I would have been dead since the note was not saved :-( . After that phone call of my near death encounter Pet Angels contacted a volunteer and had me transferred a day early to prevent any other fatal mistakes in my outcome."

Prudhoe is doing quite well. He seems to be house trained, and he knows his basic commands such as sit, stay, and lay. He still has a bit of puppy in him as he gets very excited and he does like to jump. Although, since we brought him home on Saturday, the jumping has become very minimal which is great.  He is getting along well with all our dogs and is proving to be a great playmate/wrestle buddy for Ruger and Denali.

We took him for a short run on Sunday morning (just under a mile) and he did very well. He is a hard worker, and he wants to run. He is also picking up the commands quickly. He does have a bit of weight to lose, but overall he is doing very well.

We are excited to work with him and to have him as part of our family!

Posted by Lucky Fox Kennel at 10:13 AM No comments:

We have been helping a friend of ours start a speed work group in our area that will meet once per week and focus on helping local runners get faster and meet their running goals. The group is called The Fit Club and you can learn more here if you are interested.

The first group workout was this morning, and about 12 runners showed up to work on speed. Nick brought Ruger along. It was a good chance to work on his "social skills" as well as passing and commands. The workout was a simple fartlek of 2 minutes hard/2 minutes easy with a warm up and cool down. After the "hard" segments, the front runners loop back to pick up the runners in the rear. This was a great chance to let Ruger go "on by" people moving in an opposite direction. Overall, he did very well and enjoyed the workout. Plus, he received quite a bit of attention which is always nice. 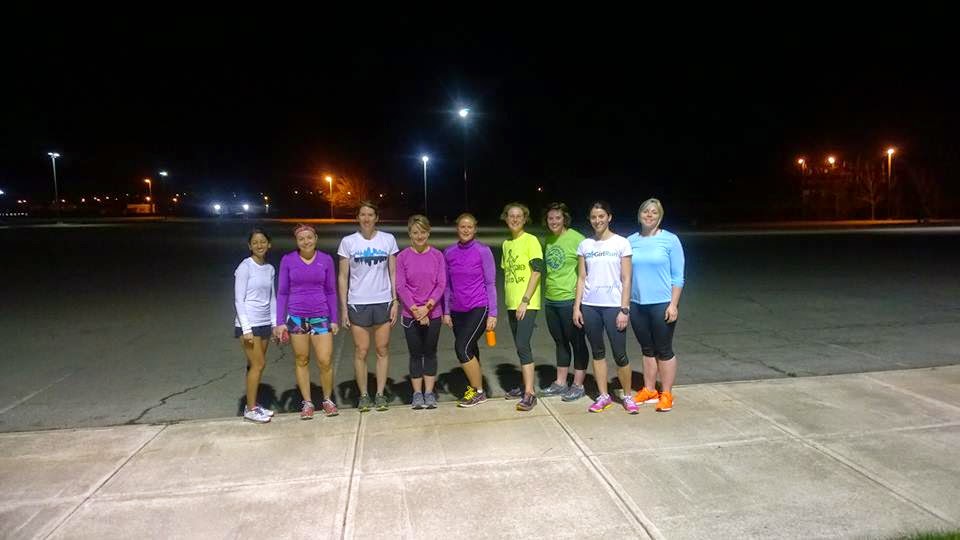 Nick and Ruger were kind enough to be the photographers
for our post-run group photo.
Posted by Lucky Fox Kennel at 4:11 PM No comments: